Have you ever tried it before? I find that consciously recognizing 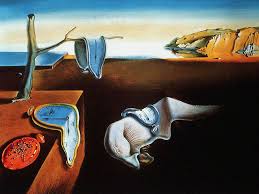 time is an illusion, setting an intention, and using visualization tips to break linear constructs and ride the curve of energy, works wonders for speeding up or slowing down time to fit your needs.

This concept is nothing new or special. It’s simply an awareness of higher science. Time does not exist. It never has. But the illusion of time does. Here is an excerpt from The Guardian about Einstein’s theory of time/space reality:

“When Einstein wrote his general theory of relativity in 1915, he found a new way to describe gravity. It was not a force, as Sir Isaac Newton had supposed, but a consequence of the distortion of space and time, conceived together in his theory as ‘space-time’. Any object distorts the fabric of space-time and the bigger it is, the greater the effect.

and causes it to sag, so planets and stars warp space-time – a phenomenon known as the ‘geodetic effect’. A marble moving along the trampoline will be drawn inexorably towards the ball.

Thus the planets orbiting the Sun are not being pulled by the Sun; they are following the curved space-time deformation caused by the Sun. The reason the planets never fall into the Sun is because of the speed at which they are travelling.

According to the theory, matter and energy distort space-time, curving it around themselves. ‘Frame dragging’ theoretically occurs when the rotation of a large body ‘twists’ nearby space and time. It is this second part of Einstein’s theory that the Nasa mission has yet to corroborate.”

Einstein was right: space and time bend. Taking this concept once step further, you can practice bending time in your own day-to-day life.

Here are three techniques to help you bend time:

1.Go into deep mediation: People underestimate what they can do in a superconscious state. On the astral plane, time does not exist. It is the perfect place to reassemble events/energy flow in your life. There are many different ways of doing this, but I find deep breath followed by a creative visualization works best.

Many people do this out of body, but you don’t have to actually go out of body to experience the results. Simply create the space in your mind where you can materialize whatever you want, and begin visualizing it as if it is already happened in your life. This jump starts the manifestation process and brings it more quickly into your experience.

For more information on how to have an out of body experience, check-out this video by Teal Scott:

2. Do a 360 degree turn: If your life is going in a direction that doesn’t feel good to you, turn it around – literally. I know this may sound crazy, but it’s worked for me:

*Stand up straight facing one direction (preferably the direction that feels most uncomfortable for you to face).

*Now visualize the direction you want your life to go (the stronger the visualization, the better). Imagine what the new direction would feel like.

(Remember, time works on a curve, and so does EVERYTHING in nature. The turn you do is not only symbolic, it is physically turning the energy around your electromagnetic field).

3. Ride the Wave of Inspiration: Perhaps the best technique for stretching time. When you act upon the energy of your inspiration (and ride it to the end of its course) you’ll find you can create two weeks of ‘work’ in a few hours. When you are living in your bliss, time literally stands still (or “curves” to move you along your path in the fastest way possible!). Acting upon your inspiration is the most powerful way to create.

Abraham-Hicks offers powerful insight on how to do this:

3 thoughts on “How to Bend Time”