Over the past two years, the majority of people who have contacted me for mentoring or taken my classes have either left, or are in the process of leaving religion.

preached that emotions are “wicked,” and unreliable. Many religions ignore emotions at best, or demonize their purpose and function.

(So why do we have them, then? Small malfunction on God’s part, I suppose?!)

Although Jesus’s message was all about the heart (and he was the ultimate empath), many churches value the mind, “right practice,” and “right doctrine” over personal experience, and prioritize doctrine above individuals. Spiritual bypassing is rampant, congregants bury their emotions in duty in an attempt to “die to themselves” (rather than nurture and expand “the well-spring of life”  — which is THE HEART – Psalm 4:23), and in the end, they’re left feeling spiritually empty and exhausted. They kill their passion, lose heart, and call it moral fiber.

Being ardently committed and passionate about doctrine or a “plan of salvation” is not the same as spiritual growth and expansion, and for empaths, this kind of “mind over emotion” environment is deadly.

Because I have SO MANY empaths contact me who are in this transition period out of religion, I thought I’d share some common themes I’ve noticed, things to be aware of, and resources that may help the process.

*Most people who outgrow religion feel they have nowhere to go. They either carry a chip on their shoulder about religion and turn 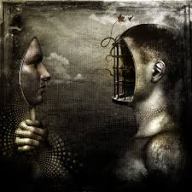 off all aspects of spirituality out of (understandable) anger, OR float around aimlessly with no sense of connection to others and no clear moral compass.

*For those who come from a strong Christian background this is especially true, as most Christians have a deep sense of community/family, and when you leave, no one knows quite what to do with you. It’s not that they’ve stopped loving you or no longer care, they just don’t know how to relate to you anymore. And leaving the religion feels like you’re leaving THEM. And in a sense, you are.

*Many who leave religion often go through a pendulum swing, trading a life of duty/service/rules, to a maelstrom of drugs, sex, and partying. This swing typically causes them to eventually go back to religion and shut down their hearts even further, because they never learned to trust themselves. They never learned moderation. They never figured out who they are OR resurrected their hearts. They simply tried to numb the pain by releasing all their suppression in one fell swoop. And because they made a mess of things, they feel even further convinced that they “need” religion to babysit them, because they’re convinced they are sinful to the core. In my experience (with the people I’ve worked with), this is the most debilitating conclusion one could come to.

Having a system that babysits and monitors your behavior might be good when you’re spiritually young and immature, but

you are meant to eventually grow-up. A parent wouldn’t keep their kid in a play pin for the rest of their lives. That’s abuse. We are meant to grow, make mistakes, and learn how to take care of ourselves. Sadly, many churches and religions foster an unhealthy dependence on their system, emphasizing that without them and their rules/standards/structure, the people would be utterly lost and hell-bound. This is the most destructive and emotionally/spiritually stunting system a person can submit themselves to.

So what can you do?

If you’re coming out of religion, here are some tips to help you stay grounded/healthy:

*Connect with others who are in your shoes: When I first left religion, I didn’t have friends for a while – at least not any that I felt truly understood my heart. I still believed in (and had a relationship with) that which I called “God,” but I was exploring what that meant outside of the programming I’d been raised with; I had no desire to abandon it entirely. I simply needed to feel authentic, a feeling I deeply lacked in the religious environment. There were too many things I did not resonate with, and I just couldn’t lie anymore. It wasn’t until I connected with others who were on a spiritually “open” (and expanded) path that I began to truly find myself again.

Check-out Meet-up groups in your area, or connect with groups on online (Facebook has a ton). I also explored YouTube videos and found others like me (YAY), some who have become very close friends. Finding your “tribe” is an important part of the exit journey. You might be surprised how many people out there are on your same path.

*Know the withdrawal stages. This will vary for each person (depending on how severe the religious programming has

been). For me, it wasn’t entirely excruciating, because although I was raised around religion my entire life (including fundamentalism) I managed to escape all the extremes, and the one church I grew up going to was pretty mild, open, and free (emphasis on having a relationship with Jesus, not on the “church” itself). But I also never deeply connected to it. I’m not sure why that is, but I have NEVER been able to connect deeply to any organization. It just didn’t resonate…and never has.

But for some of my friends/family who were in pretty extreme/fundamentalist groups, it is a much more painful, excruciating, and even terrifying process to exit. If you were raised or deeply programmed in a religion that preaches legalism and constant fear of hell, it’s extremely difficult to leave (and all the more crucial that you do, when you’re ready).

*Join support groups – especially if you’ve been in anything that resembles a cult. Again, Facebook and Google communities have groups that help people who are leaving fundamentalism. It’s important to connect with others who understand the process you are going through (so you don’t feel alone). And it wouldn’t hurt to consider therapy. A lifetime of religious programming takes time to be free from. You don’t walk away unscathed. A lot of unhealthy beliefs stay with you. And frankly, most religions don’t equip you for living a healthy life outside of their boundaries. Get the support you need.

*Have compassion on yourself. I think one of the biggest challenges people who leave extreme fundamentalism have is

the ridicule and tone of ridiculousness they (and others) have toward them(selves) “how could you have ever believed in that?!”

Remember that the reasons you were in religion is because on some level it served a purpose, and the purpose is different for everyone. For some, religion was simply a stepping stone on their path of spiritual awakening, for others, it served as an escape from a destructive or abusive life.

Extreme religion often appeals to those who’ve been abused because of the strong boundaries many fundamentalist uphold. The organization will often feel “clean” and “safe” and offers an immediate sense of family and support. This is not only appealing for the abused person, but can initially feel deeply healing. The strong boundaries gives the initiate an opportunity to feel “safe” and hear messages about God – and that initial experience, regardless of how abusive the church/cult may turn out to be, is always the hardest thing to grapple with when one considers leaving. They feel the church “saved” them or that God spoke to them (or led them) there, and if they leave, it would be denying that experience.

Leaving religion also causes people to question their ability to hear God speak. This alone can be devastating. When you are raised in an environment that teaches you to listen to them (or their doctrine) above your own intuition/inner-knowing, it severely damages your ability to tune-in to your own inner guidance system. Putting your faith and trust in something external from you is disempowering. Period. It is impossible to be truly (ultimately) free when you give your power away to a person, an organization, or any doctrinal idea.

It’s okay to honor and respect your decision to be in religion. You don’t have to demonize the experience, but you also don’t have to stay in it. Every experience we have is here to teach us, and when we judge the process, we limit the understanding.

However, it is equally important to realize we grow out of things. Just as we go to 1st grade, then 2nd, then 3rd, we’re not meant to stay in the same place spiritually forever, and after a person gains a sense of safety/foundation and feels strong enough to go deeper, they often feel stunted and trapped, the once appealing religious standards now become stifling to further growth.

This typically causes one to feel a tremendous amount of guilt, (with the extra bonus of fear if the church is one that stressed the consequence of eternal damnation.)

Leaving fundamentalism can be a huge psychological mind f*&K and it takes some time to be free from the fear. But

freedom does come, and often, if you love yourself enough to continue to go deeper with your spiritual growth, you find more freedom, love, and harmony than you’ve ever had in the church/group you were a part of. God is not a building, and spiritual growth is not limited to a group of people. Peace and expansion, as well as a deeper (and more freeing) experience of the Divine awaits all who love themselves enough to receive it.

God is not in a box. Why should you be?

Here are some resources:

(For those who ARE Christian, but have left religion or are perhaps feeling spiritually dead, this John Eldridge talk is the perfect reminder that there is nothing religious about Jesus. It’s possible to be a Jesus follower and be deeply in touch with your heart, your emotions, and your vulnerability. In fact, it’s essential:

For those who are ready to move beyond religion entirely, here are some things to challenge your spiritual journey for further growth: