A time of shift and change is directly upon us. The power to manifest upon your

intention and focus is becoming increasingly responsive. As humans, sitting in a dimension that provides the greatest contrast and expansion, we must take advantage of this opportunity for creation—for we are expanding the Universe in the biggest way.

Those who really make a dent in this shift are the those who realize the power of their position and focus on this Earth, those who can be simultaneously touched and moved by pain in the same breath, and those who ask themselves, “As the epicenter of my reality, which way will I direct this Universal energy flowing 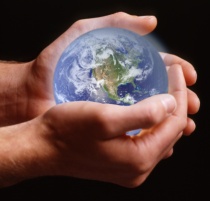 through me? What will I stop feeding by my focus? What am I telling Source to become?”

Source is always becoming your deepest desire; it is not fooled by the surface, the sweet sugar coating. This is why it is important for us to be honest with ourselves and attune to our deepest desires so that we may accurately shift our focus to the real task at hand—to that which Source is also focused—and meet in victory and alignment together.

For example, I once knew a girl who had an insatiable urge to go travel and explore a foreign country because she thought she would find greater purpose in her life by doing so—so she set out on an escapade. But Source responded to what she was really asking for (a peek inside herself) and set up nearly every event in her travels to achieve this tender and somewhat painful introversion.

After all was said and done, she realized that her reality followed her (as thoughts tend to do) and that her world was where ever she was, no matter what. Source didn’t necessarily provide her with perfect travels; it provided her with the truth she was seeking about herself and the Universe.

Source is always responding to thought. This is good news because it means that you will inevitably meet the answers you’ve asked for through opportunity. However, if we want to reduce the “lag time” of realization between your desires and manifestation, we must be clear

with ourselves about our core desires and live in an open state of awareness to the epiphanies lining you up with them.

One of the mind’s greatest capabilities is the imagination. Throughout history, the imagination has been altered in some minds to be something naïve, fantasy, idealistic, or an escape from reality. Most of us have been discouraged to keep the imagination alive that we came in with as a child, because it holds no weight in such a logical world. But I am here to tell you that the imagination is inspired. It can and will be moved by God, if you let it.

Anything that appears static within your world has begun as a thought form and been offered enough energy to then vibrate at a certain frequency to appear in your reality. In other words, you are the food to your thoughts. Your brain doesn’t see a difference between the things in your imagination and the things in front of your

eyes. They are both merely pictures. It is your consciousness interpreting what is real or not real to you.

We must not lose our sense of imagination that we’ve all been gifted. Let’s no longer discount this limitless, friendly part of creation. The playful landscape of your mind is the richest soil you could ask for—it is where all seeds and potentials are planted.

Holding a vibration and vision of your idea of heaven benefits all of us on this Earth. However, it does not benefit either of us to then open our eyes in an attitude of comparison and fixate on what is missing here. Take account of all that is already here and things will transform in front of your eyes.

Source is a force that has extended itself far enough from itself—so that it may discover itself—and you are the thought form manifesting at the “end” of that extension. You are the magnitude. Your thoughts, and subsequently, your vibration, are literally at the leading edge of time space reality.

As an expression of Source, Source knows nothing that you are not and knows nothing that you can’t become. In fact, it has no judgment to what you will become. It is rolling out the red carpet for itself (you). Source sees all as beautiful, and surrenders to you as the artist, painting its masterpiece through your eyes. Through focus, visualization, and the imagination, we can embody bliss.

What will you tell Source to become?